Hero Replacement: Determining the Best Alternatives for a Banned Hero in Dota 2 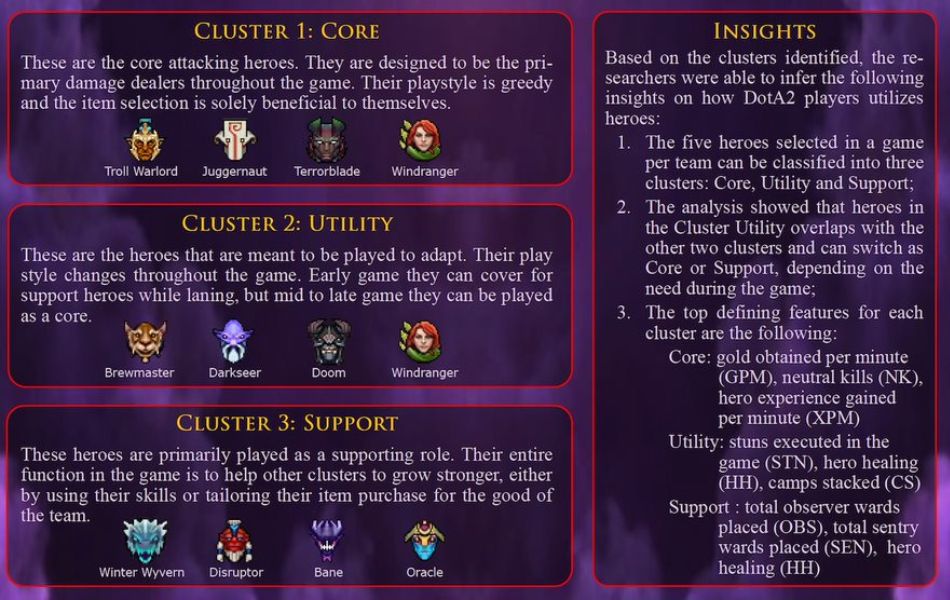 One of the pitfalls of DotA 2 teams is when their strategy is compromised because a key hero is banned. They scramble at the last minute to find a replacement for the pick that would either make or break their game. To minimize this problem, the researchers looked into clustering similar heroes based on their game impact.

The data used for this analysis was sourced from OpenDota’s API centered on the professional matches for the span of the recent season. With the use of K-means algorithm, similar heroes to a banned hero can be retrieved according to the specific role that a team wants it to be played. Results of the analysis showed that heroes can be clustered into three categories: Core, Utility, and Support. Based on the identified top features per cluster, core heroes focus on dealing damage throughout the game. Utility heroes are focused on being versatile and adaptive throughout the game, and transition as a core and support depending on the situation.

Lastly, support heroes focus on maximizing the whole team’s advantage by providing support to cores and buying items that contribute to the overall good of the team. Researchers found that certain heroes can be played in multiple roles, depending on the game strategy. This allows teams to draft with ambiguity, which can be leveraged as an advantage against an opposing team. For future study, it is recommended to further optimize the data by separating win and lose games. Furthermore, the data can be focused on a specific DotA 2 patch and should be continuously updated to maintain relevance to the current metagame.